Korčula, the fabled birthplace of the renowned explorer Marco Polo, is named affectionately by some as 'Little Dubrovnik'. And once you gaze at walls and towers of Korčula Old Town it’s quite easy to see why. Studded by fortified towers reaching high above city walls, Korčula Town is one of the most beautiful examples of coastal Dalmatian towns. Culturally rich and with a tradition of authentic gastronomy, it is sure to be one of your favourite stops on your cruise.

Korčula has been inhabited since the dawn of time, or so the locals would have you believe. Still, there is evidence that settlements existed there thousands of years BC. The island population took a turn for the better with the establishment of Greek colonies and subsequent Roman colonisation. Korčula changed hands frequently due to its strategic trade and military position. It is located at the mouth of river Neretva and served as a convenient starting point for the interior of the mainland, in addition to being halfway between Greece and the Venetian Republic and close to the Republic of Ragusa. Today, it is the most populous island in Croatia.

Things to do in Korčula Admire The Beautiful Old Town

Korčula Old Town is possibly the most popular historical center in Dalmatia, bar the one in Dubrovnik. Packed with history and culture, it is a must-see for everyone who visits the island. The old central Plaza exudes richness and dignity and is surrounded by beautiful medieval and renaissance buildings, one of which is the St. Marcs Cathedral.

After walking around the Old Town and visiting forts and towers, make sure to drop by both the Town Museum and the Icon Museum – right next to it is All Saints Church, another must-see attraction. When you get tired of walking around, relax in one of the numerous bars and restaurants in the Old Town. The prices are reasonable and the food is absolutely delicious!

Korčula is also famous for its exquisite red wines and carefully and meticulously tended vineyards – if you’re a wine lover, that a tour of these places will definitely not be amiss. Most of the wines here are home-made, boutique wines produced in small quantities and not available outside the country.

You can even grab a bike and make an adventure out of it – stop wherever you want to have something to eat and taste the finest reds that your host has to offer.

Visit The Birthplace Of Marco Polo

Marco Polo, the famous explorer, is said to have been born in Korčula Town. Although historians differ on this, if you ask the locals they will simply point you in the direction of his birth house – it’s a done deal for them.

You can take a guided tour of the house and learn details you would be hard-pressed to uncover yourself – the guides are knowledgeable and friendly. Take a look around the restored house and peer through the window at the horizon before you – something that the great explorer surely did himself, if this is indeed where he was born! 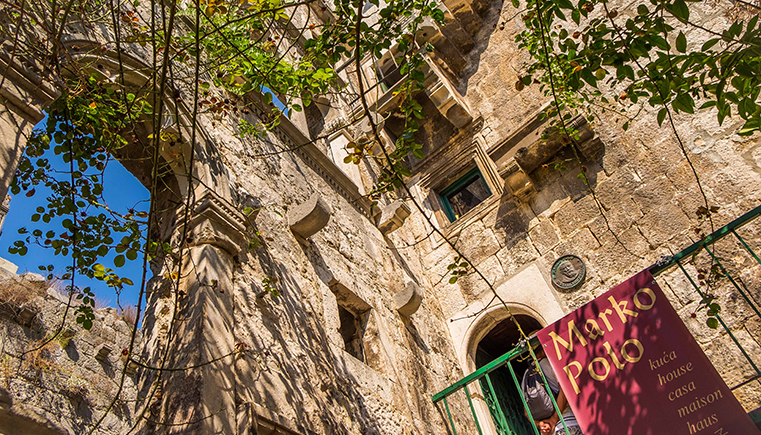 If you’re on the island in the month of July or August, don’t miss out on the traditional Moreska Sword Dance. The teams of red and black weave an intricate story of love and war right in front of your eyes. There is dancing, singing, and sword fighting – and the sword fighting is the real deal! The dance was danced all over the Mediterranean in the past but today it can only be seen on Korčula, where they have been nurturing this tradition for over 400 years!

The show plays out twice a week usually and it’s sold out most of the time so make sure to book your tickets well in advance and come at least an hour early to grab a good seat!