Simmered within the confines of a dome-shaped cast-iron baking lid, Peka is the traditional one-pot dish which can only be described as the ultimate in Croatian comfort food.

Sharing food is an integral part of Croatian culture. Food brings the community together in an unexplainable way that becomes a part of life. It’s typical that those who prepare the food will fuss over whether you’ve enjoyed enough or not, usually they will insist it’s the latter, only to then bring more food out! Peka is particularly popular for social gatherings or events given its ability to serve many at once! Croatian’s love to congregate around a table for hours deep in conversation enjoying the company of their companions over a delicious meal, most often than not with a shot of rakija.

Peka has definitely stood the test of time and is still frequently consumed by locals and flavour seekers globally. Some even argue that it’s the dish of Croatia! For Croatians, it’s traditional to cook this meal in their fireplace at home. More common than not, Croatian families have their own special outdoor ovens in order to prepare dishes like Peka.

Embed this image on your website – Just copy this code and insert it onto your site!

Whilst the meal itself is recognised as Peka, it’s actually the lid that is the traditional ‘Peka’. You may find that Croatian’s will refer to this dish as ‘ispod Peke’ which translates to ‘cooking beneath the lid’ and in this case, the unique dome-shaped lid.

The history of Peka can be traced as far back as 5,000 years. Even under Roman rule, Croatian’s maintained their unique cooking style, despite the Roman’s furnace influence, making it one of the longest standing dishes in Croatian cuisine.

How Peka is made

The cooking process of Peka is inherent to the dish. A simple mix of flames and coals are what make the process so unique. Reserved to its own area, a fire is created in an open fireplace, or concrete surface, where it’s heated to high temperatures. The burning wood or coal (the choice is up to the individual) creates a blanket of embers and heat in order to cook the meal. Once the Peka ingredients are prepared and placed in the dish ready for cooking, the special lid covers the pot and the hot embers are spread over the domed lid to provide additional insulation - a slow cooker before its time!

As the Peka cooks beneath the coals, an unparalleled flavour is generated. Given its special design, the lid creates a seal allowing the ingredients to infuse with each other. As the food is cooked underneath the lid, the process ensures that the outcome is moist and succulent with an additional hint of smoky aromas. These key elements join forces to create the perfect harmony of flavour!

Peka, like any other traditional dish, has many variations depending on the region, chef or family recipe. Along the Dalmatian coast, octopus and seafood are more prevalent, whereas in the countryside, heartier meats like lamb and chicken are more commonly used. The beauty of this dish is the use of no-fuss ingredients that are readily available, making it the food of the people. Although, you won’t come across a Peka that doesn’t include potatoes, onions, carrots, garlic and rosemary!

We’ve teamed up with Ivan Pažanin to learn the tricks of the trade in cooking this Croatian specialty! 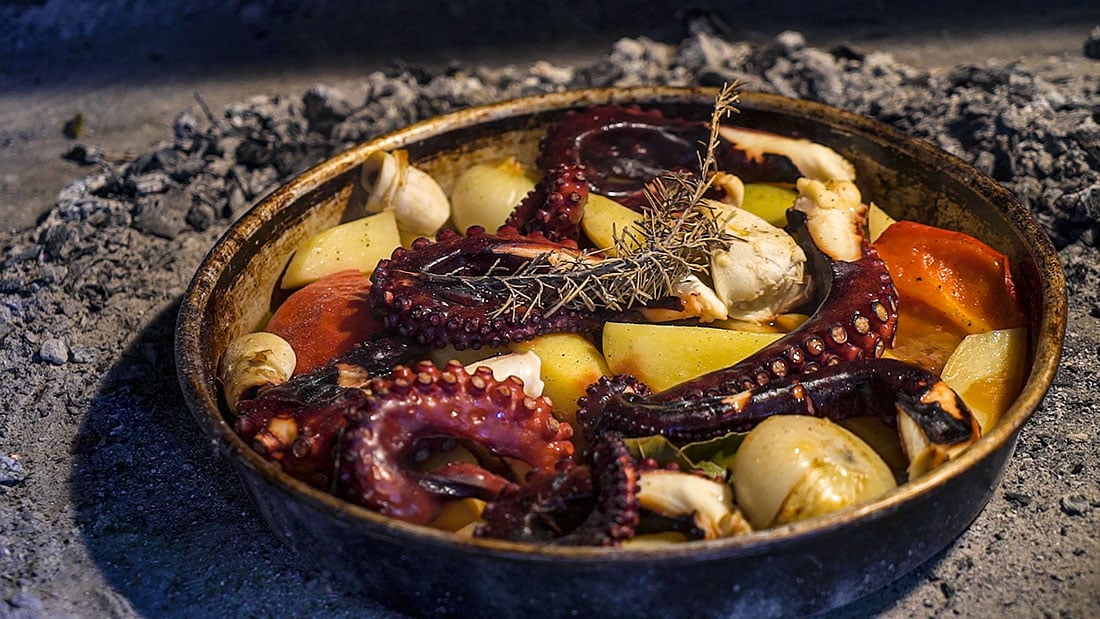 Who is Ivan Pažanin

Ivan Pažanin is a Croatian celebrity chef making waves in Croatia’s culinary world. A Split local, Ivan inherited his love of cooking from both his mother and grandmother and draws much of his inspiration from Mediterranean cuisine. He developed his own unique way to fuse flavours from Spain, Italy, France, Greece and Turkey which comes across in his dishes. Ivan’s genius in the culinary arts was apparent when he landed his first chef job at one of Split’s most prestigious restaurants early on in his career. Since then, Ivan has continued to dominate the culinary world with his drive and passion for food.

His finesse in the culinary arts pivoted his career to the screens where he became a guest judge on a national celebrity cooking show, ‘Tri, dva, jedan - kuhaj’ (Three, two, one - cook). His fame catapulted after his appearance and he quickly became a crowd favourite for the population.

Join us below as Ivan takes us through his version of his famous Octopus Peka!

How To Make Peka

● 3kg potatoes (cut into quarters - if they’re on the larger side, chop them into manageable mouthfuls)

You’ll need to heat up your oven, fireplace or concrete surface with coals and flames at least 1 and a half hours prior to cooking. Heat the coals until the temperature reaches at least 350ºC/660ºF. You’ll know when you’ve almost reached the desired temperature as the coals will begin to turn an ashy colour.

You’ll need to thoroughly clean your octopus before you start cooking with it. If you have a large octopus, chop it into manageable serving pieces, starting with its arms and working your way into the body section. If your octopus is smaller in size, it can either be added in whole or cut in half - the cooking process will make the meat incredibly tender, so serving portions will be a breeze.

1. Line your Peka dish with potatoes and add a drizzle of olive oil to coat

2. Add the carrots, pepper, onions and garlic and season with salt and pepper to taste (be careful on how much salt you use as the octopus will release salt as it cooks)

3. Drizzle some more olive oil over the top

4. Place the octopus on top of the ingredients and press lightly to combine

5. Add the bay leaf and sprig of rosemary on top

6. Cover with the lid and place into your cooking chamber

7. Add your coal embers on top of the Peka dish, completely covering the dome-shaped lid

8. After 45 minutes of cooking, pull the Peka out and carefully remove the lid, gently stir everything

9. If there’s too much liquid to add the additional wine, carefully remove some

10. Pour in the white wine, cover the lid again and resume cooking for an additional 30 minutes

11. Carefully remove the coals from the lid, take the lid off and serve

Top Tip: Peka’s perfect serving companion is freshly baked bread! Tear up some pieces to soak in the unique broth for a delicious flavour combination. 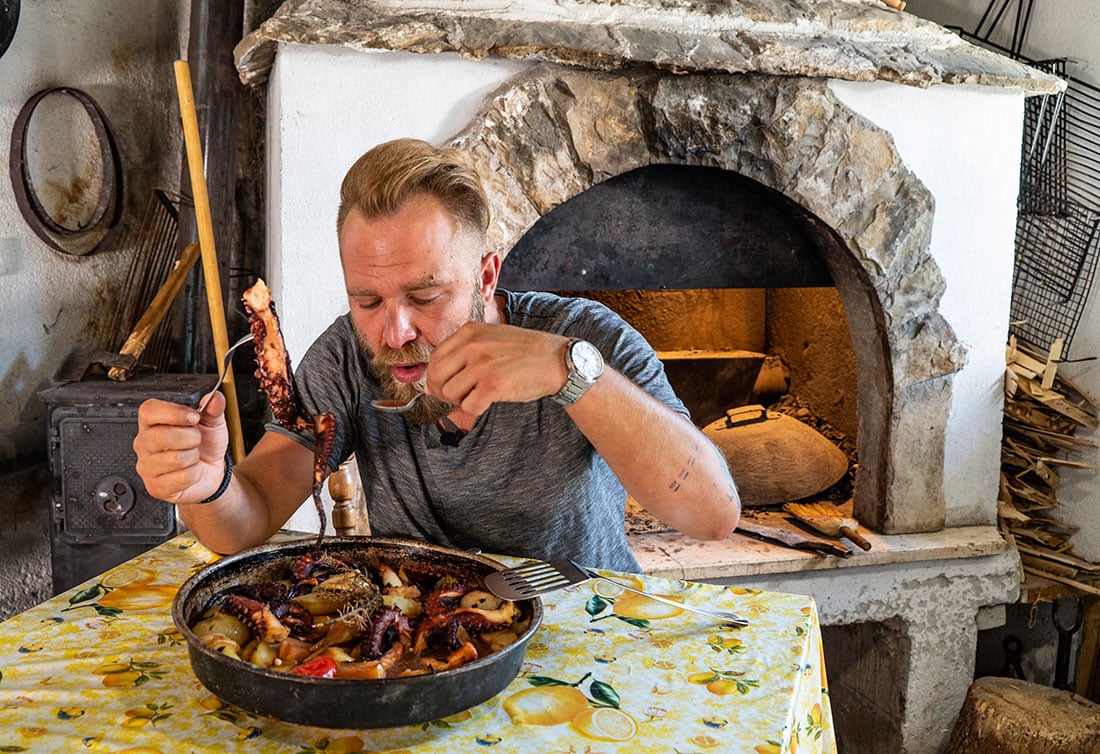 Where to eat Peka

On the most remote island of Croatia, Vis’ Roki’s restaurant is a must-visit! Set in a 200 year old family vineyard amongst the vines and olive groves, Roki’s is one of the best places to try a traditional peka meal. The restaurant requires at least 4 hours notice, but the preparation time for the delicious dish is worth the wait.

In the alleys of ancient Split, Konoba Varos’ peka awaits. With over 100 years of preparing traditional Dalmatian meals, Varos is an unmissable restaurant. Relax and unwind in an intimate setting not too far from the Riva and enjoy one of their famous specialities which is none-other than octopus peka!

Away from the hustle and bustle of Dubrovnik’s Old Town, Konoba Dubrava sits secluded amid a natural patch of forest on Srd Hill. This rustic tavern specialises in home-style cooking where a traditional peka is waiting for you to sample. Cooked to order, Dubrava asks for at least 3 hours notice for their peka.

Bring a taste of Croatia into the comfort of your own home with this Peka recipe that is certain to tantalise your tastebuds! Experiment with different proteins and vegetables for a never-ending opportunity of flavours and cook like a true Croatian!