In the middle of the Adriatic Sea, almost halfway to Italy, you will find Vis, the most remote and perhaps mysterious of Croatia’s islands. Closed off to the rest of the world for decades, but boasting a unique and rich history, a visit to Vis is a step back in time, and a glimpse into authentic Dalmatia.

A paradise of postcard-perfect towns nestled into bays, bounding with hidden caves and beaches, and surrounded by water that is every shade of cyan imaginable, Vis is an idyllic destination to explore, dine, and embrace the Dalmatian pace of life, pomalo (slowly).

The oldest Greek settlement on the Adriatic, dating back to 4th century BC, known as Issa, the history of Vis is reflected in its architecture, from Roman baths, to British forts, and even abandoned submarine tunnels. Being the farthest flung Dalmatian Island, and with its strategic position, Vis was used as a military base for most of the 20th century, and only opened its harbours, and beaches of course, to tourists in 1989. This has truly retained Vis’ untouched beauty, dotted with hidden bays, and old towns where locals still make a living from age-old fishing and wine-making traditions.

Things to do in Vis
Explore Vis Town

Vis Town seems a world away from its wild island neighbour Hvar, with a serene and relatively calm promenade, featuring the occasional market stall and well-placed palm tree, but don’t be fooled, it still has something to offer every taste. For history buffs, evidence of Vis’ Roman past can be seen at the remains of the Roman Baths, virtually in the middle of town, and the Archaeological Museum is also home to an impressive collection of amphora. Vis Town encircles the entire bay, with the southern neighbourhood of Kut, about a 20-minute walk from the main town, boasting waterfront al fresco dining, many in romantically decorated courtyards, perfect for couples and foodies alike. For families, or those that want a quiet night ‘in’, located right by the sea, is Vis’ open-air cinema, offering a spectacular view of the sunset and new release Hollywood films screen as the sky darkens. Vis town is the hub of the island, and the best way to see the hidden gems, including spectacular pebble beaches, such as famous Stiniva Beach, is to hire a scooter or bicycle, which can be easily done from many of the rental shops in the centre of town. You can even visit the very first Croatian cricket club; a bit of a Vis quirk, the sport was introduced by the British of course, and is alive and bowling even today. But surrounded by water so pristine and an atmosphere of complete serenity, you don’t have to go far in Vis Town to feel like you have truly found paradise. 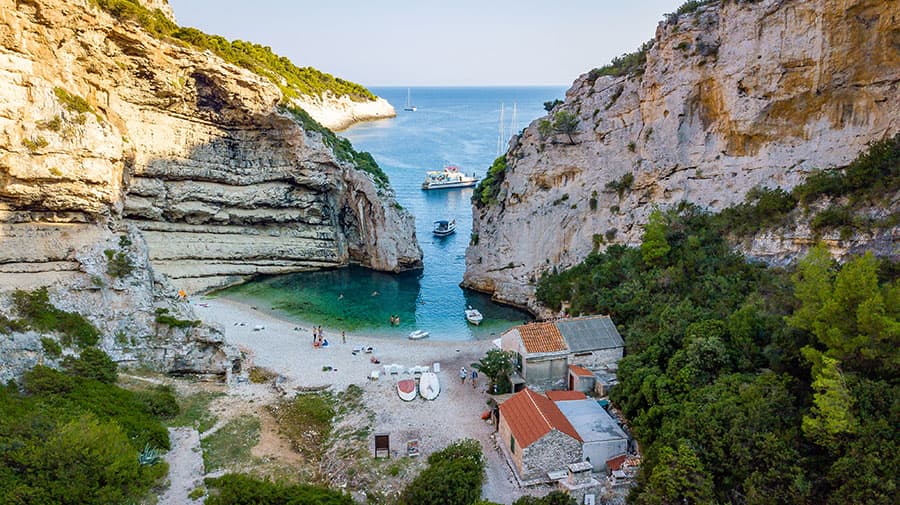 Vis’ history is steeped in military occupation, dating back to when the Royal Navy seized it from the French in the early 1800s, fortifying the main town bay, and using the island as a base for smuggling goods; to post World War II, when the island was deemed a complete militarized zone, forbidden to the public. Shrouded in mystery, during this time Yugoslavia’s leader Tito used Vis as his base and hideaway, constructing a maze of tunnels, bunkers, and other military facilities. The Vis Military Tour is a must for anyone interested in history, and keen to see sights you won’t get on many, or any, other islands. You can jump in a jeep, chuck on a hard hat, and get off-road to visit some of the most jaw-dropping secret spots on the island, including a submarine tunnel, former air base, Tito’s own cave, and the spectacular view of the island and surrounds from up on the top of Mount Hum, the highest point of the island.

At the tip of the peninsula guarding the entry to Vis town’s bay is evidence of the island’s peculiar history, Fort George, built by the British during their occupation at the time of the Napoleonic wars. Partying in Croatia often means unique and mind-blowing venues that you cannot find anywhere else in the world, from caves, to towers, and uninhabited islands, and finally here on Vis, a 19th century fort! One of the only spots for nightlife on the entire island, Fort George, is now a restaurant and event space, hosting art exhibitions, music festivals, and even weddings. Every July, the Fort is home to Ultra Music Festival’s closing party, where beneath trees and old stone walls, revellers dance the night away to flashing neon and strobe lights. If techno music isn’t your cup of tea, the Fort also has an outdoor restaurant and bar open during summer, or simply trek (or taxi) up the peninsula for spectacular views of Vis’ coastline from the Fort. 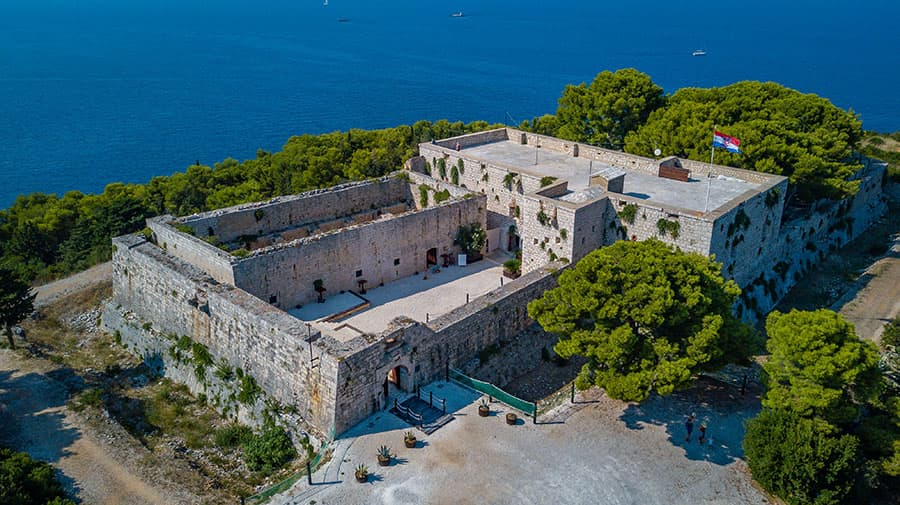 Get “Mamma Mia-ed” in Komiža

If you get a sudden urge to burst into song while twirling through the narrow streets of Komiža, a small fishing village on the West side of the island, that is in fact because it was recently the setting for the fictional town in the film, Mamma Mia 2. And it’s not hard to see why it was chosen! Only 10km from Vis town, tucked at the foot of Mount Hum (Vis’ highest peak), Komiža is postcard perfect. Famous for its fishing traditions, you’ll see dozens of fishing boats lined up against the waterfront promenade, delivering the catch of the day to bustling konobas, where you can sit back with a glass of Vugava (local white wine), and try some of the freshest seafood in Dalmatia. For those that are looking to burn off the calories after a decadent meal, there is the two-hour climb up Mount Hum where you can overlook the entire island, keen divers have a chance to visit some of the many sunken wrecks surrounding the rugged coastline, or simply grab an ice-cream and take a stroll in town through the quiet and charming labyrinth of winding streets. 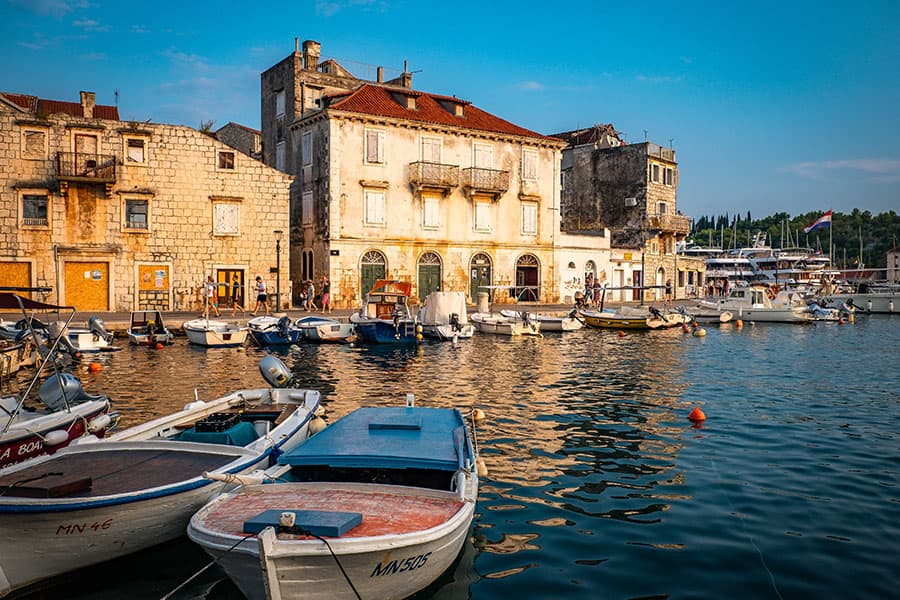 Be Enchanted by the Blue Cave

Something of a natural marvel, the Blue Cave, is as magical as its name suggests, and with closest access from Vis, you can easily beat the day trippers swarming from Split and other islands. The science behind the blue-lit cave, which instantly transports you to a scene in a sci-fi movie, is to do with the reflection of light on the water when the sun is at its highest point in the sky; but science aside, the Blue Cave is a big tick you absolutely must have on your bucket list. Previously the cave itself could only be seen by divers, but now is accessible by boat (you’ll still need to duck though!), and once through the narrow entrance, the cave opens up into a mesmerising flood of blue light. It is one of those things that just has to be seen to be believed.