Travel Alert:   COVID-19
Whether you’re travelling inland or visiting one of over a thousand islands, Croatia is a must visit destination that hosts an array of festivals and events.

This famous electronic festival has been running since 2013! The big name European music festival takes place in July annually, seeing over 150,000 people flock to Split and take in electronic beats from an all-star lineup. The festival is renowned for its high energy shows and incredible lighting displays. In 2018, headliners included David Guetta, Afrojack, DJ Snake, Galantis, Eric Prydz and The Chainsmokers.

As if partying for three days at the main stadium is not enough, the festival also moves to the surrounding islands, such as Brač, Hvar and Vis. What’s better than attending this festival? Sailing to Ultra! Join us on our Navigator Ultra Festival Cruise in 2019! Read more on Ultra 2019 here. Outlook Festival has to be the best way to finish off the summer! Outlook festival has been running for more than a decade and is considered the largest European bass music and culture festival, offering the best of dub, reggae, dubstep, hip-hop and garage music. Get ready for 4 days of music, beach parties, boat parties, tunnel parties and one spectacular opening concert in Pula's 2,000-year-old amphitheatre! Outlook are currently tight lipped on when their 2019 festival will be, but you can keep up to date with announcements on their website. Unlike festivals held along the coast, InMusic Festival is being held in the capital of Croatia, Zagreb. It has been held for more than 10 years now at Lake Jarun. During a couple of days, its visitors are able to listen indie rock, heavy metal and electronica music represented by some great names such as The Prodigy, Franz Ferdinand, Alice in Chains, Kings of Leon, Billy Idol or Arctic Monkeys. InMusic Festival is one of the most popular festivals in Croatia, and takes place annually in June!

There is amazing feeling being able to capture energy of the crowd at a concert. Alice in Chains at INmusic festival 2018.

Once known as the The Garden Festival, Love International is a popular festival that welcomes more than 100 electronic artists from all over the world. These artists grace two different stages, one being in a magical forest and the second one right on the beach! There’s no better way to experience a music festival than with fairy lights overhead and sand underneath! Read more on Love International Festival here.

✈️ One month ago we saw Love International festival in Tisno, Croatia open its beaches for a week-long party in one of the planets most picturesque party spot 🌏 #backtobackexplore

Moondance Festival is quite a new festival, but if its popularity is anything to go by, it will be here for years to come. This two-day festival is held during the summer months in the Kamerlengo fortress and can be considered a g much cheaper, alternative to Ultra Music Festival. In the past the festival has attracted almost 10,000 people annually! You can check out their website for more information.

Dimensions Festival is the perfect place to enjoy the depths of electronica, techno, house and drum & bass. Relax at the beach during the day to the sound of chilled summer beats and live jazz from some of your favourite DJs! Acts for 2018 included Ben UFO, Kraftwerk 3D, Nina Kraviz, Helena Hauff and Moodymann. Join the 2019 waitlist at the Dimensions website. 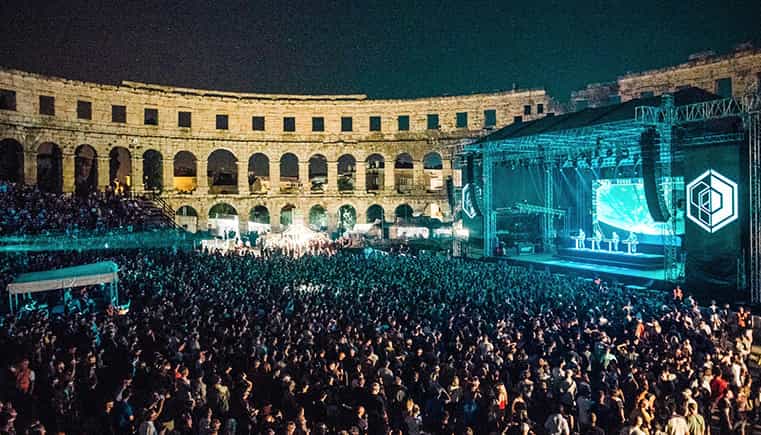 Another festival held on the island of Pag, on the most popular beach in Croatia, is the Spring Break Island festival. Organized for the first time six years ago, the festival is definitely getting more and more popular thanks to many great music name invited to perform there such as Tujamo, Plastik Funk and Adam Walker. The Spring Break Island festival takes place on two spring weekends, usually at the end of May and the beginning of June. Find out more about the festival on their website. If your idea of a holiday is festival hopping, then you need to extend your stay on the island of Pag! Fresh Island Festival joins festival greats such as Hideout Festival at Zrce Beach, where the beach is transformed to the best hip hop scene in Croatia! Fresh Island Festival is considered the number one European Urban Beach Festival, and contributes to Zrce Beach getting its name of the ‘Croatalian Ibiza’. Defected Croatia is back in 2019 and brings another round of house music celebrations over six incredible days! The international lineup for 2018 included DJ Spen, Masters At Work, Basement Jaxx, Sam Divine, Hatcha & Claptone. For more information on the 2019 festival, head over to their website.