There's a party. Then there's a Croatian party...

During the Croatian summer, the coast starts buzzing with excitement and nightlife which is why Dalmatia has recently become one of the favourite places for partygoers to visit.

If you want to feel a fraction of Croatia’s magical summer; but don’t have the time or the money to island hop from party to party on your own, then there is a solution! Why not Sail Croatia and hang out with like-minded people whilst visiting some of the hottest islands and best parties on the coast! Sail Croatia offer Navigator Party Cruises and Under 39 Yacht Tours that takes you all along the coastline, stopping at some of the hottest party islands in the Adriatic!

Every island in Croatia is fun and every single one is special. However, the following four are serious contenders for the title of the best Croatian party island...

Pag is possibly the best place to be if you want your Croatian holiday to be a blur of mind-blowing parties, great music, and hordes of young visitors determined on having a good time. Zrče Beach on Pag is dubbed the ‘Croatian Ibiza’ and it’s one of the most popular party beaches in the entire country.

Zrče Beach hosts renowned parties such as Hideout Festival, Electrobeach, Croatia Rocks, Fresh Island and others are always cropping up. Zrče’s all-hour nightclubs have welcomed the likes of Armin Van Buuren, Calvin Harris, Rudimental, and many others. One thing is for sure on Pag, and that there is never a shortage of parties to attend!

A newcomer to the party scene, Rab is a smaller island located right next to Pag, and has lived in the shadow of its larger neighbour for a long time. However, things are starting to change slowly as visitors are looking for alternatives to the often crowded Pag.

Up until recently, Rab was a paradise for outdoor enthusiasts who wanted to explore its dense forests and rocky cliffs – and it still is. However, thanks to the hordes of tourists from Pag, beaches of Rab are now lined with beach bars, nightclubs, and discothèques. This is especially true around Barbat, on Pudarice beach, which is packed with visitors thanks to the fact that there is always something going on there. Live performances, festivals, cultural happenings, concerts – you name it, Rab has it! 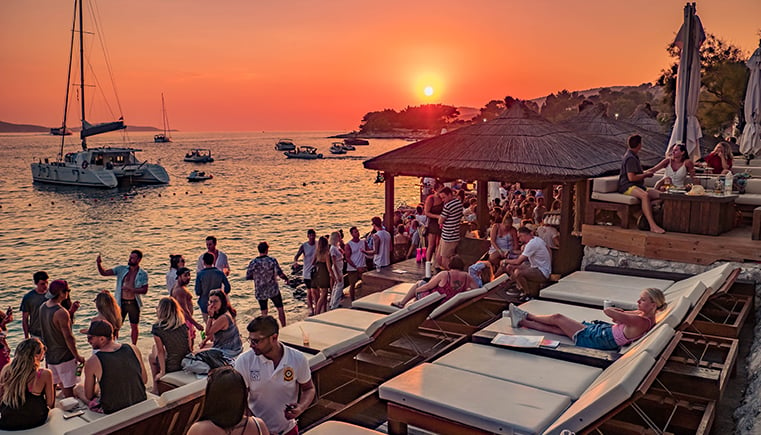 Averaging around 260 sunny days per year, Hvar is Croatia’s sunniest island. For that reason alone, it’s no wonder that it is also one of the most popular – at least with the younger tourists! Although it has always been a popular destination for people with money to spare, it´s only recently that Hvar developed a reputation as a premier party spot. Some of the best nightclubs are located in Hvar Town with others opening their doors on a regular basis. Also, the world renowned Ultra Festival Beach Party is held there every year in July.

Of course, partying on Hvar is more expensive than partying on other Croatian islands because of the fact that Hvar is an elite destination. Locations such as Carpe Diem and Hula Hula Bar are incredibly popular with both the locals and the tourists. Enjoy the pristine waters that surround the island and then relax among the palm trees of local bars and watering holes. If you are staying for a longer period of time, don’t worry - Hvar has plenty to offer when it comes to culture, food, and good wine!

Party on the Most Beautiful Beach in the World

Zlatni Rat (Golden Horn) is one of the most beautiful sandy beaches in the world and you will find it on the island of Brač. Known for its unmarred nature, Brač attracts a wide variety of tourists year after year and while it isn’t as popular as Pag or Hvar among thrill-seekers, it still offers plenty of fun from dusk till dawn. The largest selling point of Brač is the fact that it is more affordable than the other party islands, so it’s hugely popular with visitors on a budget because they’ll certainly get more for their money.

Several times every summer, Brač hosts day-long events on several spots on the island. The whole place starts radiating with positive vibes and people flock to some of the best coastal parties on this side of the Adriatic. If you’re visiting Croatia make sure that Brač is on your to do list!

Of course, the entire coast is alive with festivals during the summer. While island hopping has its appeal, you should also consider visiting coastal towns such as Zadar, Split, and Primošten if you’re looking for top-notch festivals to attend while sailing on the beautiful Adriatic Sea.

Ultra Festival Europe visits Hvar for one night but the first two nights of the festival are in Split. Tens of thousands of visitors parade through Split during the two nights that the festival is in session and the vibe is always excellent.

Zadar also has a very vibrant nightlife with various concerts and festivals taking place almost every day of the week from June until September. A little coastal town Tisno close to Zadar is turning into a festival powerhouse and hosts some of the best festivals in Croatia such as Garden Festival, Soundwave, Electric Elephant, Movement Croatia, and others.