Cruise north and discover Croatia as it once was.

It’s early morning. You’re waking up to the gentle rocking of the boat. You’re excited and ready to explore yet another hidden gem here on the beautiful Croatian coast. The rising sun is caressing the crystal clear sea; it’s enticing, so you opt for a swim before you meet up with everyone on the deck for breakfast. This really is the holiday you’ve been waiting for.

It’s time you said hello to a Sail Croatia Elegance Cruise, and unwind far from the noise and the crowds. This luxury small ship’s Northern route is ideal for mature travellers looking to explore Croatia’s coast and discover exciting new places and destinations, such as the popular Hells’ Islands, the Blue Grotto, and cities of Zadar and Trogir. Both of these ancient cities deserve the same popularity and fame as that enjoyed by Split or Dubrovnik, at least if you judge them by their rich cultural, historical, and architectural history. 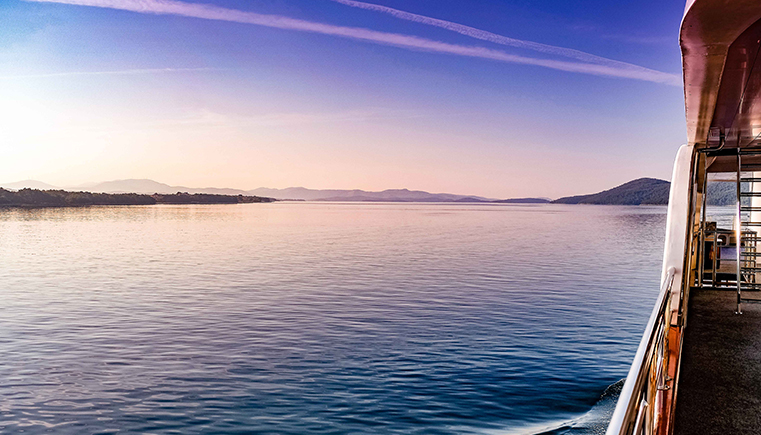 The Uniqueness Of The Elegance Cruise

Elegance Cruises are purely designed for your maximum enjoyment. There is no rushing about, no crowds and no tension – the crew takes all the measures to ensure that you as a guest are comfortable and not wanting for anything! You will get to taste Croatia’s authentic dishes prepared with fresh local ingredients while enjoying traditional entertainment both onboard and during your visits to your island destinations.

And the destinations truly are spectacular – popular with the locals and devoid of hordes, but still as every bit as captivating as the over-run old cities on the southern coast of Croatia.

All routes offer an exclusive and authentic Croatian experience and the route you choose will ultimately decide on your travel itinerary – how you plan to arrive and depart from Croatia and of course, what it is you want to see and do along the way. The recent addition of the Northern Split Return cruise now allows for a more intimate and peaceful way to explore the stunning islands between Split, Zadar and back again. 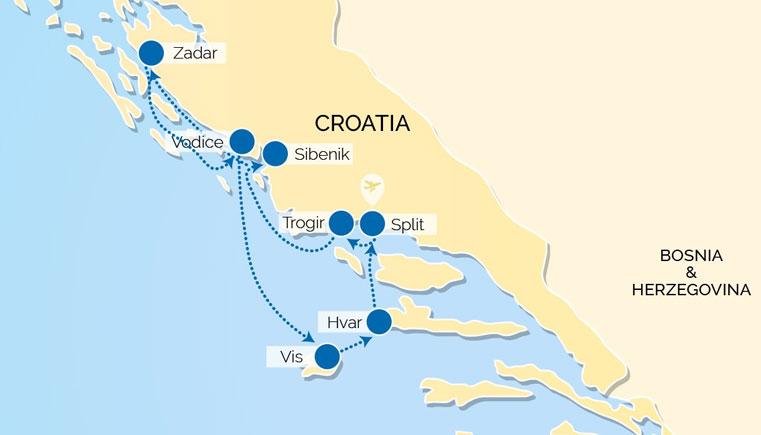 Your journey will start in Split from where you will proceed to an enchanting port town of Trogir. Founded by Greek colonists in the 3rd century BC, Trogir flourished into an important port, vital to the trade of the Roman Empire. Fortresses were built upon other, crumbling fortresses so there is little to see from the Ancient period in Trogir today – maybe a few walls that were left intact. However; every piece of stone tells a story of a town that refused to go under, a town that managed to sustain itself for over 2300 years. The most beautiful views of Trogir can be observed from St. Michael’s Bell Tower – bring a camera but leave your faint heart at the foot of the stairs! 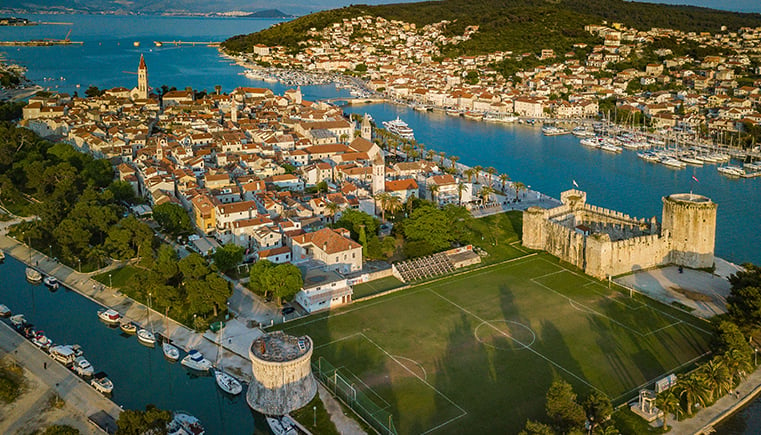 
Your next stop, the medieval city of Šibenik, also offers a lot to see. Take a stroll through the ancient city centre and enjoy the magnificent St. James Cathedral, one of many World Heritage Sites in Croatia. Šibenik is lined with old fortresses once used in the defence of the city. Today, they are silent memorials to Croatian architectural ingenuity and craftsmanship.


From Sibenik you’ll head to the cosmopolitan seaside city of Zadar! This historical town is named as one of the most impressive places to watch a sunset, according to famous movie director, Alfred Hitchcock! Sit on the cafe-lined waterfront and sip on a cold drink as you watch the sun sink into the Adriatic Sea. 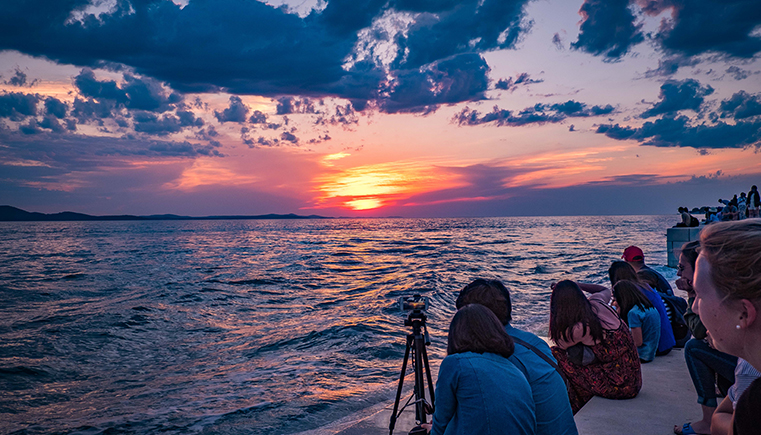 
The next day of your cruise is all about relaxation, sunbathing, and swimming in the pebbled beaches of a small coastal town called Vodice. You’ll get to experience ‘fjaka’ – a unique local phenomenon that can be described as a state of mind during which a person, while fed and rested, is still hard-pressed to do anything but enjoy the scorching sun and the cool waters.

If you’re up for a challenge you can participate in an optional day trip to Krka Waterfalls, an inland array of cascading rivers and streams which are considered one of the most beautiful spots in the entire country. 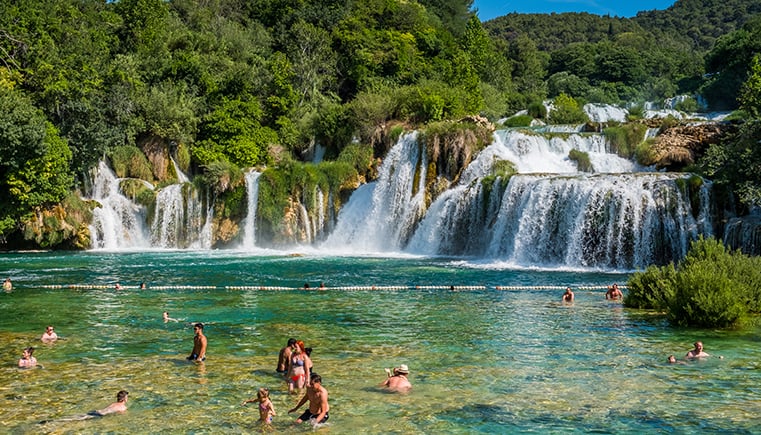 The last leg of this relaxing journey takes you away from the coastline to two of Croatia’s most beautiful islands. The first one is the island of Vis. Vis lies far away from any regular tourist routes and has only recently become a popular destination. Still, the island’s position makes it difficult to visit via conventional shipping means and there is plenty of peace and quiet to be found here if you looking for it. The islanders are friendly and the food is magnificent – you will get to try some of the best Croatian wines and dine on meals you won’t see prepared anywhere else. If the weather permits, make sure to visit the Blue Cave, a system of underwater caves only accessible by the sea – the sun and the turquoise water here conspire in creating magical scenes that can´t be described in any other way but otherworldly. 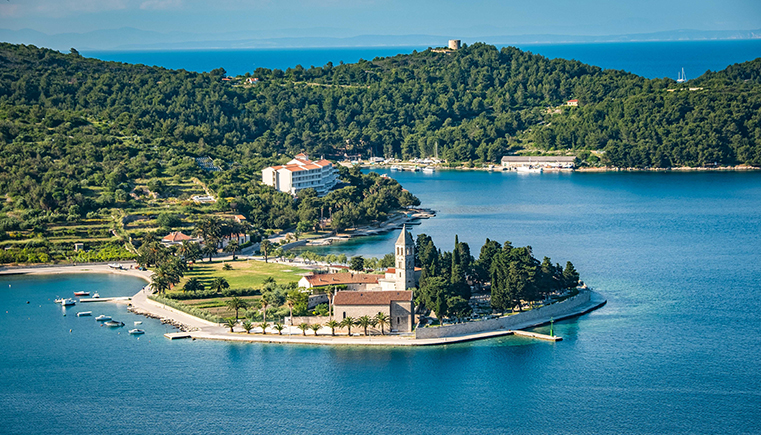 
Before spending a day in Split, exploring the streets and palaces constructed by one of the last (and the most famous) Roman Emperors, Diocletian, you’ll be marvelling the bustle and life of Hvar Island. This island is now known as Croatia’s French Riviera but was in the past an agricultural hub where everything, from olives to oranges, grew. Even today, the wines and the olive oil from Hvar are among the most valued in the country. It is one of the rare places on this tour where jet set lifestyle and tons of ancient history manage to coexist, complementing each other. 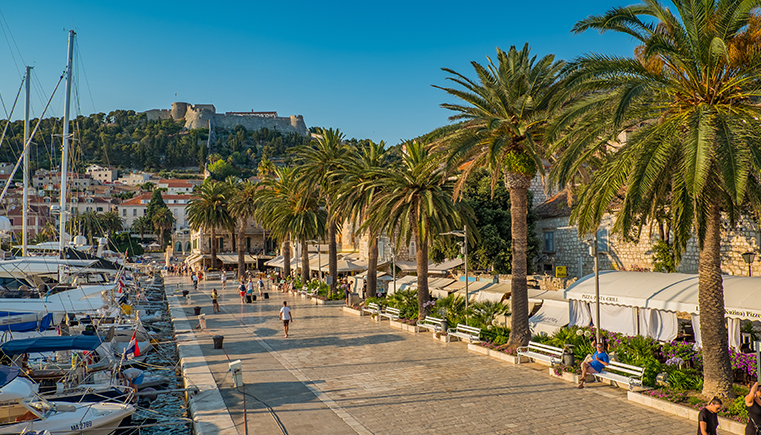 Are you yearning to discover all of these stunning places for yourself? Are you ready to immerse yourself in quiet exploration, far from hordes of tourists that are going to welcome you in Dubrovnik and Split? If you are, then join us on this elegant northern coast cruise and brace yourself for 7 days of pampering, serenity, and discovering Croatia as it once was.

Life as an Active Guide

Building Our Brand New Elegance Ship
AS FEATURED IN