Krka National Park is truly a gem worth your time. This guide explains how to get there and what to see & do in one of Croatia’s best natural beauties.

Croatia is a home to eight stunning national parks, each brimming with their own unique beauty and diversity. From the magnificence of the island of Mljet to the natural beauty of Plitvice Lakes National Park, there is something here to tickle everyone’s senses. If you’re a sucker for waterfalls, then there is one which you should definitely explore when visiting Dalmatia. Krka National Park is just a short drive from both Split and Šibenik, and is an excellent alternative to Plitvice Lakes National Park – although; if you have the time, make sure to visit both!

Krka National Park encompasses about two-thirds of the total course of Krka River and is made up of porous rocks that made it easy for the river to carve numerous caverns and lakes which attracts tens of thousands of visitors a year. What will be sure to leave you breathless are the gorgeous waterfalls, Roški Slap and Skradinski Buk.

So, after you’ve had your week of sun, sea, and fun sailing around Croatia, why not cap it off with a visit to Krka National Park. It is a slightly different experience, but one that gives you an opportunity to explore different aspects of Croatia’s natural beauties.

How to get to Krka National Park

Krka National Park has five official entrances, but if you are traveling from Split, then the closest ones to you are Lozovac and Skradin. Just take the A1 motorway and follow the signage to the park. Once you’re off the motorway you can decide if you want to go to Skradin entrance or Lozovac entrance. This will depend on how much time you have on your hands and what you want to visit.

If you want to visit Skradinski Buk and the lower part of the national park, take the Skradin entrance. In Skradin, you will board a boat that departs on every full hour and what is better you will even be able to test the waters in that part of the park. If you’re more interested in visiting Visovac Island with its hauntingly beautiful Franciscan monastery or the ethno-village, Lozovac entrance will get you closer to your mark.

Of course, you can pick a much more leisurely option and book a day trip from Split. If you want to visit the entire Krka National Park in one go, this might be a better option. The tours last up to nine hours in total, but you’ll be able to walk or sail across the entire area of the park and explore all the landmarks – this is something you might not be able to do if you decide on a solo tour.

If you’re still pumped up and feeling adventurous you can even tour the park on a bike! Drive up to Skradin, rent a bike, and set out on an adventure! Guided tours are available as well, but you can easily enjoy the park’s bike trails all by yourself. A bike tour takes a better part of the day, so come prepared!

Krka River has not one, but seven impressive waterfalls along its course but the two most famous are Skradinski Buk and Roški Slap. Both cascading waterfalls are composed of travertine barriers and are undoubtedly one of the most beautiful waterfalls in Eastern Europe – comparable only to those that grace Plitvice Lakes.

You can enjoy Skradinski Buk and its views throughout the year thanks to numerous visitor paths and bridges connecting the small islands and the river banks. You will also notice renovated watermills lining the banks; Krka National Park is one the only place in Croatia where you can see such ethnological monuments fully restored and brought back to their original function. 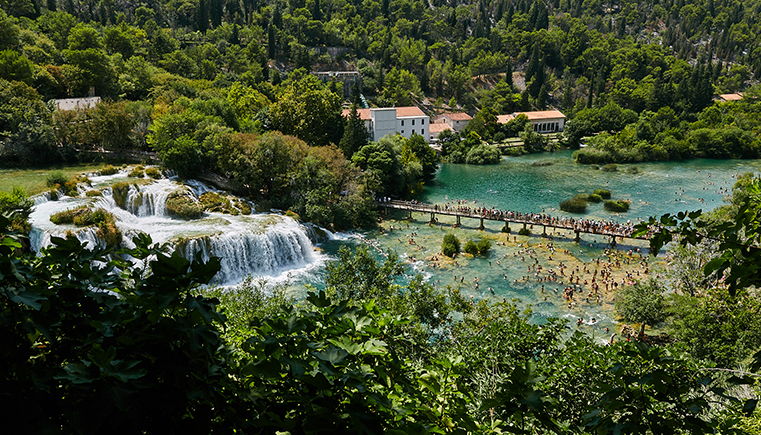 Roški Slap is also called ‘the great waterfall’, and with its 22-meters high main waterfall and numerous smaller cascades, it is easy to see why. Relax in the shadow of one of the windmills or visit the nearby ethno village to buy authentic souvenirs and take a peek at how things were done in the olden days.

Perched on a little island in the middle of the Krka River, is the Franciscan Monastery of Our Lady of Mercy, a popular pilgrimage site for the Catholics. The monastery was built in 1445 and now houses a museum and a library. You can take the boat from Skradinski Buk to get there and spend the day marveling at the rich collection of ancient manuscripts and artifacts.

Another important religious site is the Krka Monastery, or the Monastery of the Holy Archangel, albeit this one is of an Orthodox Catholic denomination. The church next to the monastery is built in an early Byzantine style and is standing atop ancient Roman catacombs, which are open to visitors. Take the boat from Roški Slap to visit this monastery or alternatively, access it from the Kistanje road if you are traveling by car. 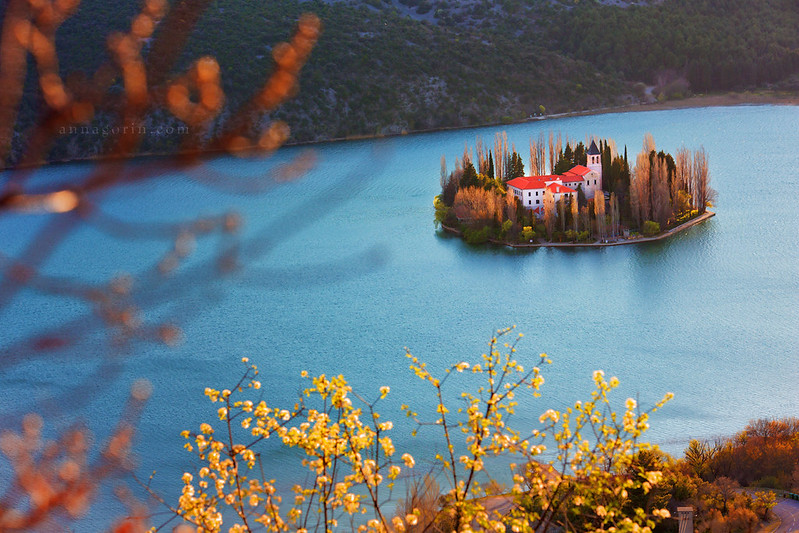 We’ve covered some of the lakes and waterfalls, as well as touched upon some beautiful churches and monasteries, but there is so much left to explore at Krka National Park! While you’re up there admiring the Roški Slap, make sure to visit Oziđana pećina, a site of significant cultural and historical significance. Here, you will discover evidence inside the cave that points to it being used by humans for shelter as early as 5000 BC! Don’t miss an educational tour of the cave and a visit to the in situ museum that showcases the impressive collection of tools found on the site.

And we’ve saved the best for last – the Roman military camp at Burnum offers a unique glimpse of the country’s rich history. Krka was once such an important part of the vast Roman Empire that a military camp was established there sometime in the 1st century AD. The site is not reachable by water but it is only a short drive from Ivoševci village. Command building wall are still visible at the site as well as an impressive military amphitheater, the second largest one in Croatia and the only military amphitheater in the region. Artefacts dug up from the site can be viewed at the local museum Puljani. 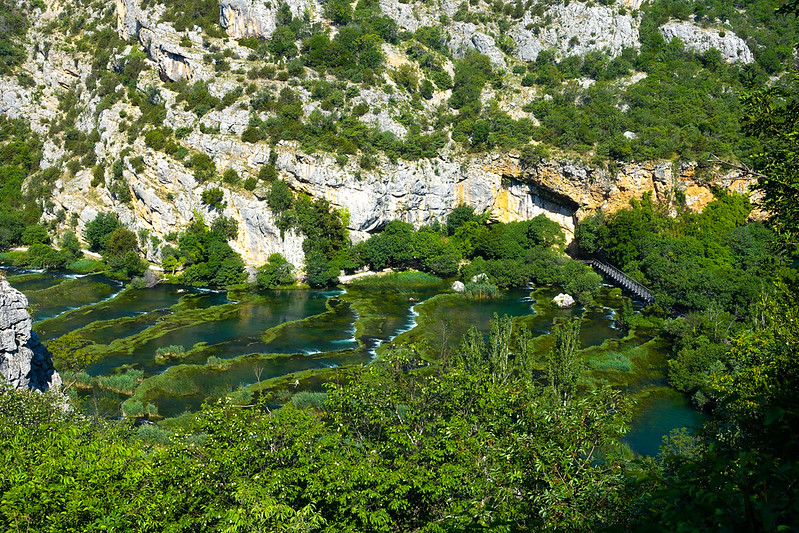 Croatia holds many surprises for adventurous explorers so don’t be afraid to break away from the beaten track and discover its wonders on your own. Krka National Park is truly a gem worth your time, and apart from its remarkable waterfalls, you will be surprised by many more if you decide to delve deeper into the wild.