We don’t have to tell you that Croatia is well known for its beautiful coastline. In fact, one of the coastlines most impressive facts is that it is home to more than 1,000 islands, islets, rocks and reefs.
“Of all the paths you take in life,
make sure a few of them are dirt.”

Whilst the Croatian islands get lots of attention, you might be surprised to learn that more than half of Croatia's surface area (65%) is actually mainland; a lot of it which belongs to stunning mountain ranges. Below are the 7 most impressive mountains any nature lover should not miss when visiting Croatia.

If you have decided to go hiking in Croatia, don't settle for anything less than the highest peak, which is located at 1,831 meters above sea level on the Dinara Mountain; a huge massif located on the border of Croatia and Bosnia and Herzegovina. Dinara Mountain as a whole is part of the Dinaric Alps, a mountainous area that extends across Slovenia, Croatia, Bosnia and Herzegovina, Serbia, Montenegro and Albania. Two major Dalmatian rivers also emerge at the foothills: the pristine Krka and Cetina. Walking up to take in the view is definitely worth the effort. Since this is the highest peak in Croatia, we're going to let you in on a little secret to make hiking it easier; the easiest route to the top is from Glavaš, near the town of Kijevo, while another popular route is from the town of Knin.

Biokovo is the highest mountain in Dalmatia, reaching the peak of St. George at 1,762 meters above sea level. Biokovo is also a mountain rich in plant and animal species since, thanks to its geographical position, it has both a continental and Mediterranean climate. Exploring Biokovo is definitely adventurous considering there are many caves and pits around this area. Moreover, the nature park Biokovo above the Makarska Riviera is a good option for botanists as well as walkers and cyclists. Reaching the top will be well worth your time due to the impressive view from Biokovo. On a clear day you can see many Dalmatian islands, the coastline to the north and south, and surrounding villages. Legend even says that on a really clear day, one can also see the peak of Monte Gargano in Italy! 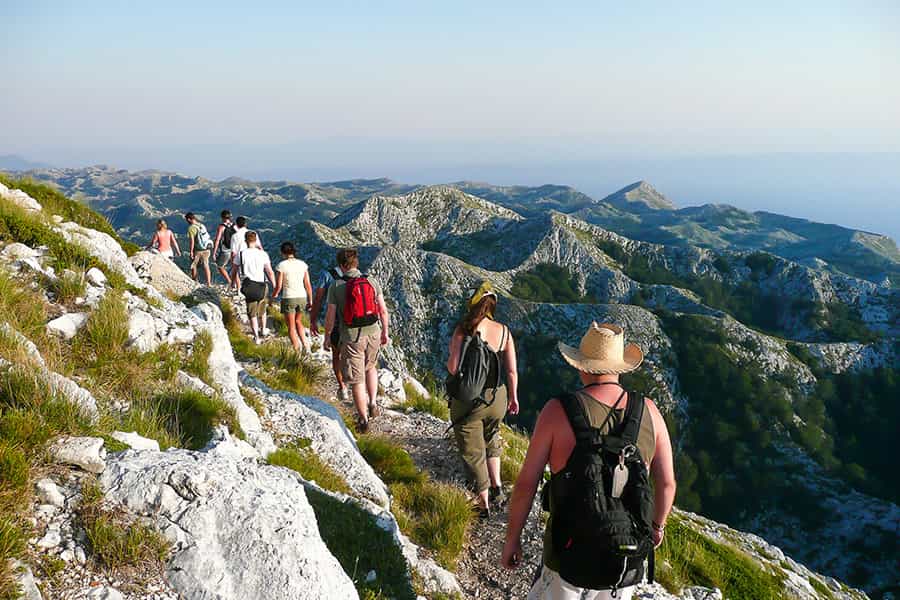 Velebit is the largest mountain range in Croatia, around 145 kilometres in length and 30 kilometers in width. This mountain is the perfect choice for those that prefer an active holiday. The beauty of nature on the mountain of Velebit, especially the significant number of endemic species, has been acknowledged since 1978 by the UNESCO programme of Man and the Biosphere (MAB). The entire mountain range area is today protected as a nature park, whereas North Velebit and Paklenica are National Parks. The highest peak of the Velebit Mountain is Vaganski vrh (1,757 meters above sea level) precisely in Paklenica National Park. Don’t be deterred by the massive peak, as the mountain is marked with many trails and more than twenty shelters for accommodating mountaineers along the mountain range. If you are a nature lover, hiking up this impressive mountain is not to be missed!

Mosor Mountain is part of the Dinaric Alps and stretches from Split to Omiš. The highest peak of the Mountain is Veliki Kabal at 1339 meters above sea level. Mosor Mountain is also well known for its very active mountaineers club. For anyone staying in Split or surrounding areas, taking an excursion to Mosor is a must, since even the locals think of it as a tradition. Although it is not the highest mountains in the Dinarides or on the Adriatic coast, Mosor is well-worth the visit, considering there are many marked paths for easy walking, as well as mountain huts and shelters. As always, the best comes last and it is worth the wait (and the walk!) to the top, where you’ll be rewarded with a splendid view of several Croatian islands, as well as the towns of Split, Solin, Trogir, and the Kaštela area.

Risnjak Mountain is located in the province of Gorski kotar, a region well known for mountains, forest and untouched nature. The name of the mountain comes from the Croatian word "ris" which means lynx, an animal exterminated from the region in the 19th century. Risnjak is part of Dinaric mountain range which connects the Alps and the Dinarids, and is rich in diverse flora and fauna. Due to its natural beauty and rare plant and animal species, Risnjak was proclaimed a National Park in 1953. Today it is also one of eight National Parks in Croatia. If you decide to conquer its peaks, you can climb up to Veliki Risnjak (1,528 m), Snježnik (1,506 m), Sjeverni Mali Risnjak (1,434 m) and Južni Mali Risnjak (1,448 m). Don't be discouraged, hiking the area is not difficult, the routes are well marked and you will eventually be rewarded with panoramic views of lush forest.

Pelješac is the largest Croatian peninsula (348 km2) after Istria. It is 62 kilometres long and only 3 to 8 kilometres wide. The highest part of the peninsula is located above Orebić, on the north-western side, at 961 meters, called Sveti Ilija. If Pelješac were an island, this definitely would be the highest peak on the Adriatic. Hiking to the very top can be done from three different starting points: from Urkunići, (east from village Ruskovići) Karmen, Bilopolje or Gornji Nakovanj. The most commonly used starting point is from Bilopolje and usually takes three hours to reach the top. Because of Pelješac's isolated position, there is no doubt that this is one of the most extensive viewpoints in Croatia. 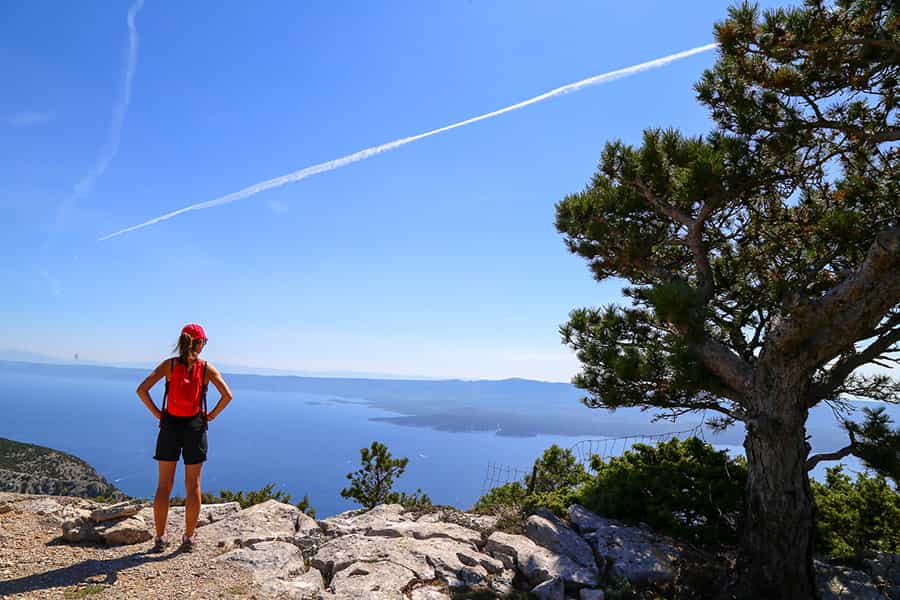 With this many beautiful mountains to explore and the fact that Croatia has more than 5,000 kilometres of mountain hiking trails, hiking is definitely an ideal way to explore Croatia! So, if you too are a hiking enthusiast, why not try our Active Cruises and explore Croatia by hiking or cycling to some of these breathtaking peaks! If there is one thing Croatia never disappoints at, it is definitely offering an incredible view!

Discover Croatia on our Hike Cruises!
Share this Article