Cycling in Croatia is more than just a holiday – it’s a vacation for the senses. Explore the most amazing coastline on two wheels.

Imagine waking up to the peaceful sound of the Adriatic sea, beautiful vistas of small Mediterranean islands full of life and history, smelling the scent of pines early in the morning all while enjoying fresh homemade Croatian delicacies. What can be better than that? Well, not much really – it’s a wonderful way to spend any holiday, but for some people, it might just lack a certain level of excitement and action.

So imagine the thought of all that, but combining it with a week of sailing and cycling along the Croatian coastline, discovering breathtaking views, landscapes and challenges at every turn on your bicycle – now that’s more like it!

For many people, the thought of cycling in Croatia is one which excites and gets the blood pumping, but the thought of planning such a trip is enough to bring your plans to a grinding halt. Just like any holiday, good planning is key, and when it comes to cycling in Croatia, there are many important elements involved – such as mapping out the best route, arranging adequate bikes, safety precautions and not to mention transportation.

Fortunately, you need not to worry about all of that, as Sail Croatia offer 7 day cycle holidays as part for our Active Croatia Cruises which allow you to explore Croatia like never before. You’ll be cycling your way around stunning islands and across diverse terrain in no time – and all without lifting a finger!

The great thing about cycling in Croatia is that the coastline is as diverse as it is beautiful. It offers a myriad of different landscapes, terrains, and views, and not all cycle routes are not particularly demanding. Sure, there is high terrain all over Croatia, but most of the time you are cycling at a comfortable pace with the average cycling distance around 20-30 miles per day across a mixture of light off-road trails, gravel roads and asphalted routes. It is important to be fit if you decide to embark on this adventure, but you’re not expected to be an Olympic cyclist, which is great as it keeps the door open for a wider range of people to participate. For those who want to explore the coastline on wheels but feel they don't have the pedal power to do so, we have e-bikes available for hire so you can let your legs relax!

Popular destinations to visit when cycling in Croatia

Cycling across islands on the Dalmatian coast will bring you head to head with some of the most beautiful old cities and settlements in Croatia, many of which are UNESCO Heritage sites. Our Cycle Croatia Cruises have grown in popularity over recent years, and as such, we have now incorporated Split to Dubrovnik and Dubrovnik to Split cycle routes into our itineraries. 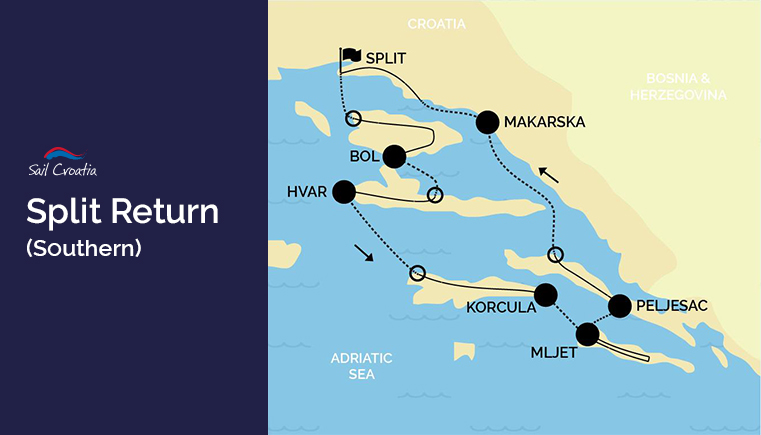 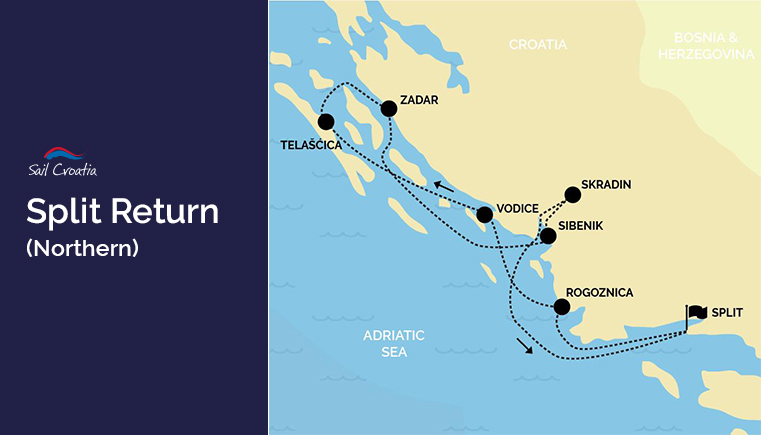 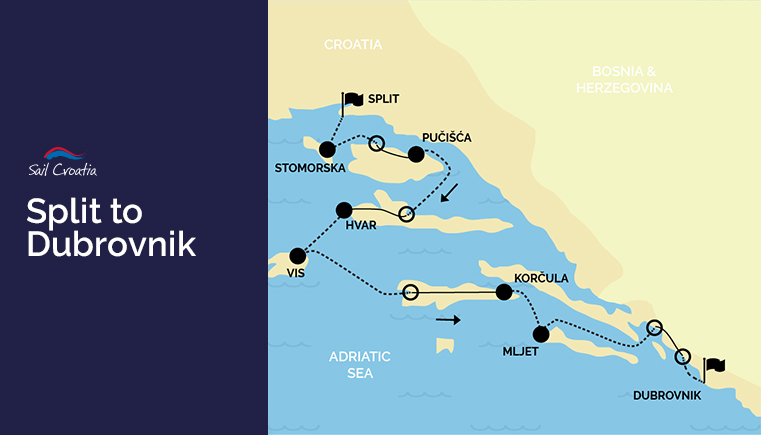 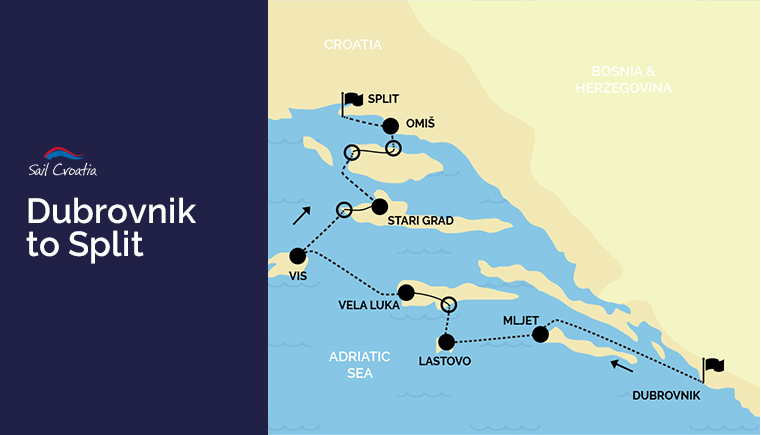 Exploring Brač, the island closest to Split is a treat in itself. The marble white stones in the island were used for centuries as building blocks of some of the most breathtaking buildings in the world, including the White House in Washington, and the Reichstag in Berlin. Cycling across Brač will be challenging and is a maximum difficulty cycle as we reach maximum altitude of 580m. Your efforts will be well worth it though with the breathtaking panoramic views of the neighbouring island of Hvar on the descent to the beach.

The humble small village of Rogoznica is by no means just a stop along your cycle journey. A short stretch north of Split, this coastal spot is home to the impressive Dragon Eye Lake that makes for a refreshing dip after a day of cycling. Here you’ll experience a more demure ride with only 4.5 kilometres of distance covered. Its stunning coastline can be best described as an imitation from a watercolour painting with hues of turquoise and emerald melding together around the town. Rogoznica also boasts a remarkable wine scene most famous for its ‘Babic’ wines!

Stari Grad, a town on the island of Hvar, is one of the oldest towns in Croatia, dating back to the 4th century BC. The name itself literally translates to ‘Old Town’ and its oldest part is a protected heritage site, unlike any other in the world. Cycling around Hvar is a special experience. The island receives more sunshine than any other place in the Adriatic Sea, and our cycling routes visit many small villages along the way.

Cycling in Croatia will take you through diverse and exquisite landscapes. One of the most beautiful routes is the one that takes you through the town of Omiš and the Cetina River Canyon. This route has everything, from dense pine forests to high mountain trails. You will be going up the river Cetina, to a place called Radmanove Mlinice – where the ‘Winnetou’ movies were filmed – and upon reaching the mountain plateau, you will be rewarded with great views Omiš and the Brač channel.

While cycling in Croatia, you will notice that every inch of your journey brings new and exciting views. Croatia is truly blessed with some of the most beautiful landscapes in the world. While on your bike you will get an opportunity to explore it in great detail. Make sure to visit national parks and parks of nature that abound in the area.

The southernmost national park is on the island of Mljet – a relatively flat island, well suited for exploring with a bike, and covered in a large pine forest. Two of the most prominent features of the national park are two sea inlets, one of which houses an old, Benedictine monastery that stands atop the entire surface of a small island, called St. Mary Island.

Cycling in Croatia is more than just a holiday – it’s a vacation for the senses. You will meet new like-minded people and enjoy all Croatia has to offer, from the wonderful views, breathtaking nature and inspiring history to the thrill and personal achievement of exploring the most amazing coastline on two wheels.

What are you waiting for? Take the Cycle Croatia challenge now!

Join us on our Cycle Cruises!
Share this Article